Please note we are not a crisis service. Although different polls will sometimes give different results, Ireland frequently ranks as the most smartphone-addicted country in Europe, and even the western world as a whole. By 2016, 76% of Irish people were using the internet every day, and 35% of people said that their smartphone is their primary device, and they would use it over alternatives such as a laptop or tablet.

Our levels of smartphone use should be a big red flag to us all, as there is no shortage of peer-reviewed, in-depth scientific studies that show a clear correlation between smartphone use and mental health issues. Overuse of a smartphone can lead to problems in anyone, but by far the most at-risk group, and therefore the most well-studied, are teens.

Not only is there a clear link between smartphone ownership and risks to mental health, but also between time spent on a smartphone and level of unhappiness. A study published earlier this year in the psychological journal Emotion found that children between the eighth and tenth grade (roughly 12-16) were less happy the more they used a smartphone. Just 13% of those who spent less than 2 hours a day were unhappy, while this rose to 18% for those who spent up to 19 hours a week on them, and 24% for 40 hours or more.

There are a lot of competing explanations as to why smartphone use could be negatively impacting our mental health. Social media contributes to many of these, giving rise to issues like FOMO (fear of missing out), cyberbullying, body image and self-worth issues, anxiety over adding friends and getting likes. All of these issues can affect people at any age, but young people are the most at-risk, not only because they are the first generation to grow up with this technology already in place, but also because there is more peer pressure, and their minds are still forming.

Our Attention Is Taken From Us

According to Ofcom in the UK, the average adult’s screen time is 6 hours and 25 minutes per day. That’s an incredible 91 days per year! Imagine what we could do with an extra 91 days in our year?! Well that is unfortunately where our time is going at the moment – staring into a screen. One of the reasons this could be harmful is if we’re spending that much time on screens it can be taking time away from important things we could be doing for ourselves. People often say they have no time for exercise or self-care, however on average, adults will have at least some time they might be able to repurpose from their screen time. 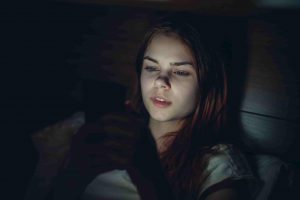 Our brains are not really designed to process copious amounts of information all the time, and it takes some time to process information.

Body image is also a concern when it comes to social media and phone use. One study in Fiji outlined how important this could be. In 1995, in certain parts of Fiji there were no TVs. They had not yet been introduced to western ideas through TV. One research paper wanted to investigate what impact exposure to TV would have on people’s body image. What they found was that after the introduction of TV in Fiji, and in turn the introduction of Westernised body image ideals, dissatisfaction with the body went up as did disordered eating patterns. This was implicitly learned in that the exposure to TV wasn’t telling them “You need to look like this”, rather the exposure to new norms internalised the belief that “I should look different”.

Another difficulty of excessive phone use is information overload. Our brains are not really designed to process copious amounts of information all the time, and it takes some time to process information. When we are constantly bombarded with information, especially at the moment, it can be particularly stress inducing. Think about the content and information we now have access to – terrorism, protests, murders, pandemic, environmental crisis, mental health crisis – the list is endless. We are constantly bombarded with information about potentially stress inducing things, on a scale that our brains have not really developed to cope with. Think about how small the world was before the internet – you would know your family, a few friends, and you would know what the TV news told you. Now we have 24 hour news at the tips of our fingers, access to potentially thousands of friends across the world, and an awareness of more difficulties and stressors across the globe. It really is information overload, so managing our phone use can be really helpful with this so that we don’t feel so overwhelmed.

One of the downfalls of social media and our mental wellbeing is this search for external validation. Again, it’s been amplified compared to what our brains are used to. Pre-social media, we might have been worried about what our friends or family thought. Now we can worry about what hundreds or thousands of others think too through the very numerical representation of “status”. Of course, wanting community and to be accepted is a very normal human need, however the scale has changed massively and now we are in a position to be judged by hundreds more people than was ever possible before. Not only may that be anxiety provoking for some people and lead people to put on a front, but it’s also sending the message that external validation for my posts or my images are important. It brings us away from our internal gauge of what is important and where our value lies. More and more with social media are we learning that our value comes in our appearance, and that’s a problem. If someone’s value is solely dependent on their appearance and the feedback they get from others, it can be really difficult to find happiness simply because if you’re putting yourself out there for hundreds to judge, there will be someone who doesn’t like you. If your feeling of value and worth is dependent on others liking you, then it might be difficult to please everyone online.

While we still have more to learn on just how much of an impact smartphones can have on our mental health, it’s clear to see that they do have an effect. It may take a few more years to discover exactly how they affect us, and what we can do about it, but for now, the best way to protect yourself is to limit your smartphone use. If you would like to avail of counselling for you or your teen you can contact us here.

Written by Joe O’Brien, PSI, Trainee health psychologist. Joe is currently completing his Professional Doctorate in Health Psychology and has completed an MSc in Health Psychology through the University of Bath and a BSc in Psychology from DCU. Joe’s special interests are psychological interventions for weight management and behaviour change interventions. He also completed his MSc dissertation on the impact of alcohol hangover on behaviour.

Ready to talk? Get in touch

Manage Cookie Consent
To provide the best experiences, we use technologies like cookies to store and/or access device information. Consenting to these technologies will allow us to process data such as browsing behavior or unique IDs on this site. Not consenting or withdrawing consent, may adversely affect certain features and functions.
Manage options Manage services Manage vendors Read more about these purposes
View preferences
{title} {title} {title}
Request An Appointment
Email Us
Book Online